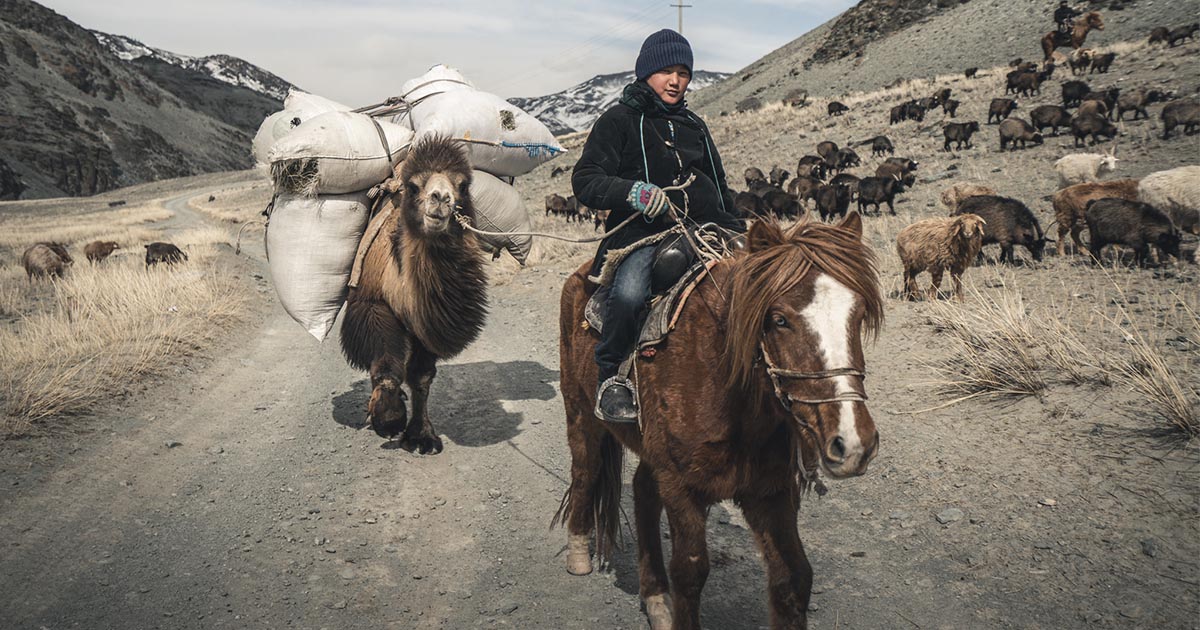 In the Winter of 2011 and at the ripe age of 19, Christopher Schrader departed Hong Kong on a 10 day journey to reach the westernmost corner of Mongolia, in order to live with his good friend Alibek and his Kazakh nomadic family. Alibek and Chris first met on an expedition the previous summer to walk over 2,000 kilometers across the Gobi Desert.

While on the expedition, each of the 14 participants had a responsibility: Chris helped Alibek look after the camels. Everyday would start by loading the camels and end when Ailbek and Chris would spend 4 hours allowing the camels wonder and graze. Although he didn’t speak English, and Chris did not speak Kazakh, through drawings in sand, frantic gesticulation and a lot of patience - they had long conversations about everything from McDonalds to women to horseback riding.

Over the course of two months, their friendship deepened and they ended up creating a pact together to do a life swap. Chris couldn’t imagine anything more joyful than the total freedom of a nomad: not bound to a single place, a set of rules or the obligations of modern life. Likewise, Alibek dreamt of cities, restaurants, traveling the world and meeting women! They were both excited to host each other, and share in each other’s lives.

Chris spent Winter living with Alibek’s family and toward the end of his three month stay with Alibek, started to plan the closing chapter: the Spring Migration.

Kazakh Nomads are pastoral nomads, meaning that they don’t roam the steppe randomly, but have 2-6 locations they migrate between every year. Their animals, which are their livelihoods, need to move when the grass runs out. By the end of the winter season, all the grass high up in the mountains is depleted and the animals are the sickest and weakest they’ll be. It is a critical moment for nomadic families: safely transporting their families and animals from winter to spring pastures.

Unfortunately, the winter had been so severe that there was still snow in March and Chris would have to miss the opportunity of a lifetime to join Alibek on this epic journey.

Years passed, Alibek came to Hong Kong and lived with Chris and his family and they kept their dream of doing the Spring Migration expedition together alive.

Then, tragedy struck. In the winter of 2015-2016, Mongolia experienced a ‘Dzud’, an unusually harsh and cruel cold. During this time, Alibek and his family lost over half their animals. This was their entire wealth, without which they could not continue to live as nomads. Alibek and his family moved to Ulgii, the largest city in Western Mongolia and Chris thought that the opportunity to do this trip had disappeared forever.

More years passed, life ebbed and flowed and in early 2018 Chris found himself back in Hong Kong at a low point in life. It was in this moment that he received a call from Alibek’s uncle, Agii, who told him that one of his family members (a legendary horselord) was about to embark on a Spring Migration. Further, Alibek would be joining. Agii asked Chris if he could join and without thinking twice, he said yes.

He told Chris that he would need to be in Mongolia within the following week. Chris got in touch with Aidan Haynes, a photographer from Australia, and embarked on what would be the most epic and challenging expedition of his life.

While living with Auez and his family and subsequently embarking on the Spring Migration - there were a thousand stories to be told. Laughter, tears, pain and joy. It was a roller coaster ride like none other. Chris brought a drone and together with an iphone, produced a film about the expedition. Today, we share with you that film and the hope that you enjoy it.